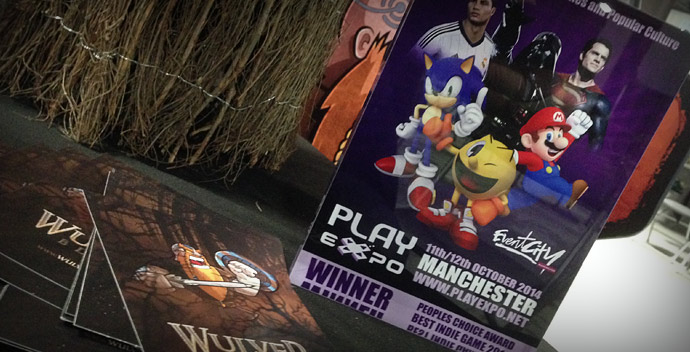 Wow, what an absolutely INCREDIBLE weekend! Play Expo was an absolute BLAST!

Over 20,000 people turned up to the event and it was absolute madness all weekend, the Wulverblade stand was in a constant state of play the entire time. It was suuuuuuuuuperb! And to top it all off Wulverblade managed to win the ‘Peoples Choice Award – Best Indie Game 2014’! I’ll go into more detail below with a blow by blow account :) Needless to say, we’re all buzzing!

So, set up day was as stressful as you’d expect, packing everything into my Landrover makes the last wave of Tetris seem easy! 1 arcade cab, 50″ screen, 2 PC’s, lighting, 15ft banner, 3 roller banners, roman helmet, props, table covers, flyers and me! Once there it was time to get the stand built up. There was a bit of a hiccup with the stand at first, but once that was ironed out with the organisers it was time to build! 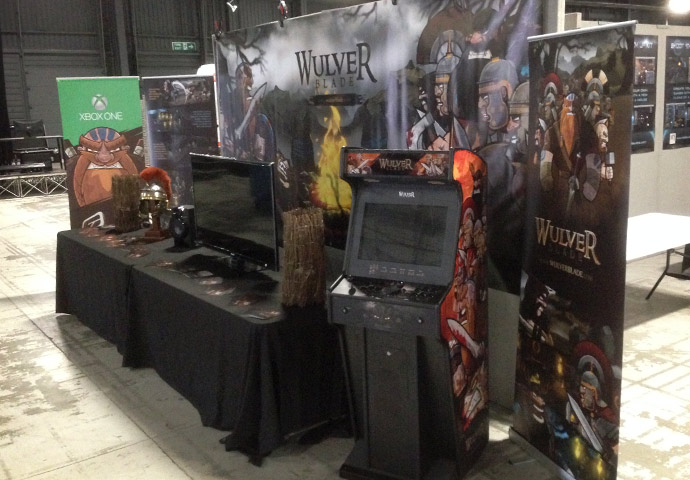 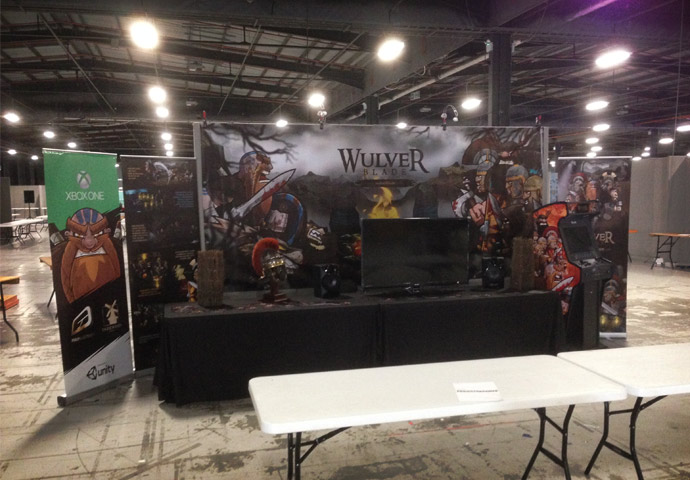 As you can see, I was pretty much the first person there ha haa. Not that I worry about stuff like this, set off insanely early and panic about everything, honest ;)

So with a bit of fine tuning the stand was ready for the next day…the excitement was building, big time!

With around 10,000 people lined up outside the arena, in what has to be the biggest queue I’ve ever seen in my entire life, I couldn’t wait for the doors to open!

IT WAS MENTAL! So much so I didn’t even manage to snap one photo on the first day as the stand was packed 3 people deep for almost the entire day!!!! I could not believe the response and interest that Wulverblade generated! The arcade and big screen was jam packed with constant 2 player games all day, literally. It was immense. People were coming back for more go’s, parent’s were pulling their kids away to let others in, it was just incredible. I was in heaven! People really, really, really LOVED Wulverblade :)

By the time 7pm came and door closed for the first day I was broken, my voice had almost entirely disappeared and I needed FOOOOOOOOOOOD. So I grabbed some quick fix take out, drove to the hotel and collapsed ;)

Day two was a tad quieter, but still crazy busy. 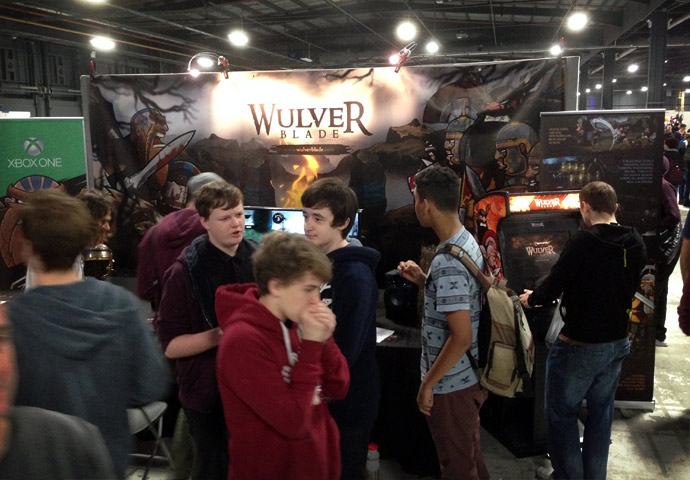 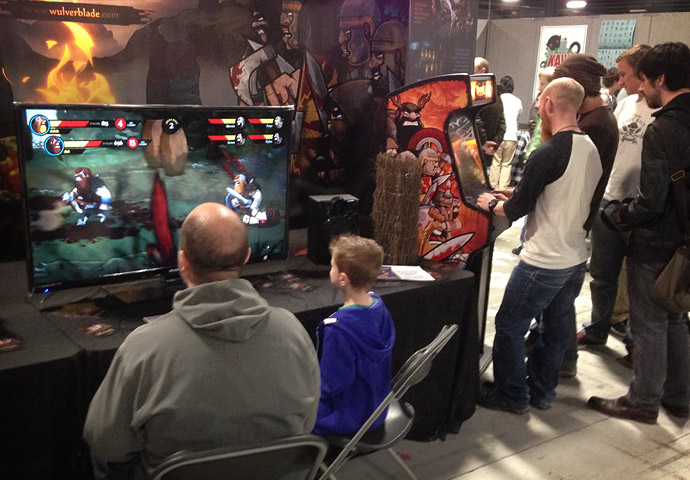 The one overriding question that kept on coming was ‘which company is making this, do you work for them?’ to which I answered…erm…’me and few friends over in the US make it!’ and everyone seemed shocked in disbelief, they all seemed to think that it was some large scale big name game! I was blown away by this as people seemed genuinly blown away. What shocked them even more was when I told them it was pre-alpha and that we were only showcasing an arena (which is a fun little unlockable mode in the game) and not even the big ‘main game’ campaign. Many people stated that we should just release this ‘as is’, as they simply loved it (which we won’t of course, its just part of the bigger picture) which was so heart warming. 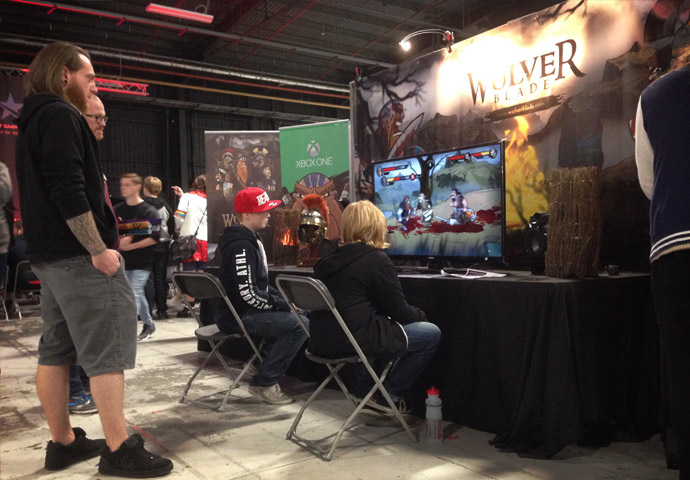 The amount of interest that people showed in the historical underpinnings of the game was also a surprise (but this was a UK show, so that makes sense as we don’t get many games made about us) and its amazing to see just how many people are genuinely interested in our ancient history. Especially the parents actually, who really liked the idea of their kids actually learning something (indirectly) while they played. I had to put the breaks on a few times as I could have quite happily slipped into some deep history discussions with some of the real history buffs that I spoke to. 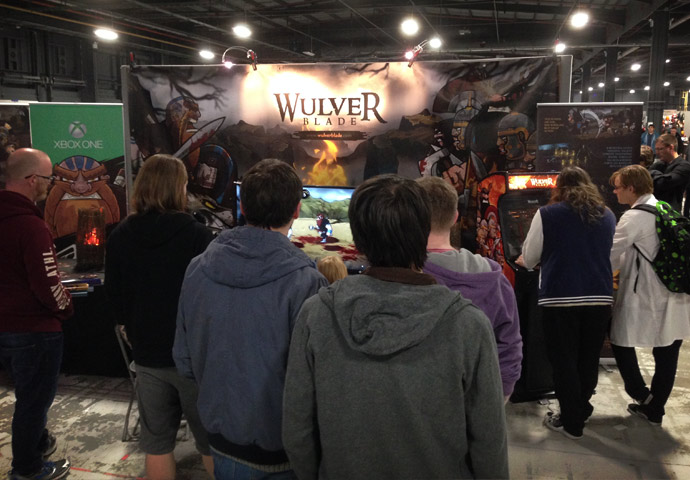 One angle I’d never expected was just how much kids would enjoy this game. I always thought Wulverblade would be reserved for the old school crowd like me, but man, the ones who really couldn’t put the pads down were the kids, they bloody loved it! Parents weren’t fussed about the gore either as they said it somehow felt ok and was a vast improvement to most of the games that their kids wanted to play.

Probably the most reassuring part of the weekend was getting the feedback I was most nervous about, the response from the truly hardcore arcade and retro fans out there. This show has a MASSIVE retro and arcade angle to it and is THE goto event in the UK. I’m lucky enough to know a few of the guys that organise the arcades here, so they popped over with some of their arcade buddies and gave the game a good hammering. The response…overwhelmingly AMAZING! They loved it! We’ve sunk months and months and months into the combat engine, making if ‘feel’ just right and to get the thumbs up from the people that know this genre the best was just amazing. 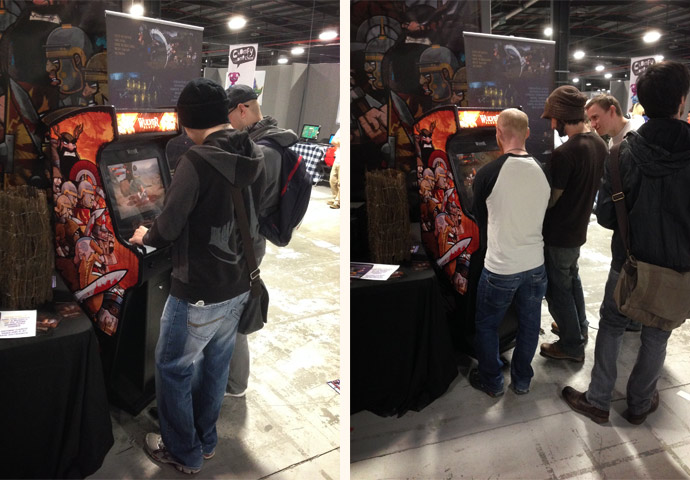 I could carry on writing about how amazing the feedback was, but you’ve all likely fallen asleep already, so I’ll stop.

To end on, lets just cover that award…oh yes, an award! 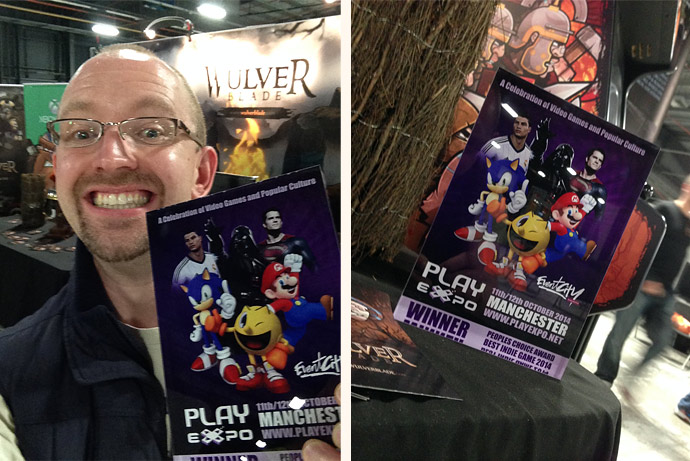 Just look at my stupid face, it still looks like that right now, almost 24hrs on ;)

Visitors to the show were handed a voting form at the entrance to tick off their favourite indie from the show, with the winner being announced at the end of the weekend.

Well, when 5.30pm came on the Sunday I was BLOWN AWAY when I got called up to the main stage to claim the award for Wulverblade! I literally couldn’t believe it. The competition was SUPER tough too, Team 17 were there with their Indie line up, Jeff Minter and his killer array of games, Gang Beasts and many more (36 in total). I was so, so humbled by this, people had actually voted for little old Wulverblade and lots of them had! So here is a MMMMMMASSIVE THANKS to all you awesome folks that voted for our game. We love you all!

I’m now about to collapse for a day, catch you all soon!