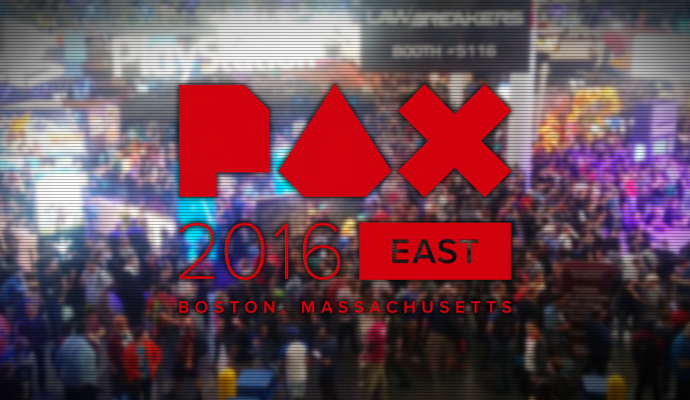 Hey everyone, E. Doody here! It has been a very exciting time for us here on the Wulver team, and I wanted to hop on and give you all an update!

First, as Mike’s last post covers in detail, we launched our Steam Greenlight campaign on April 19th. We eagerly watched the page for feedback and comments and were Greenlit in only a week! It can be extremely nerve wracking to expose a passion project to public judgement. This brings us to our second very public, very stressful event: PAX East.

PAX East is a massive, consumer based show that takes place in Boston each year. I have been a fan of PAX for years, both as a patron and as a potential exhibitor. The best aspect of being a part of PAX East is that it is 100% a show for the gaming community. We have shown Wulverblade before at industry conferences such as GDC, but there is nothing better than getting the game in the hands of people who are, at their core, excited about seeing and playing games. To get to PAX, we used the help of the Indie MEGABOOTH.

This was not the first year we submitted Wulverblade to the Indie MEGABOOTH. In fact, when we think back on previous submissions, we are shocked at how foolish we were to submit such early builds. When we heard we were accepted to the MINIBOOTH we were ecstatic. Of course we were hoping for a MEGABOOTH appearance, but we were happy just to be involved. The MINIBOOTH consists of 18-24 games that are grouped together and set up on 6 podiums. Each game has 1 screen, a title topper, and a keyboard stand. Here was our setup:

Given the nature of the MINIBOOTH we knew our placement would be key. Having walked around a MINIBOOTH before, the most effective way to interact with players seems to be the following:

Without the room for lavish, over-sized, eye-catching banners and backdrops to lure people in, the game has to stand on its own to catch people’s attention (which we like to think Wulverblade does.) For this reason, we were hoping for a position on the outside edge of the MINIBOOTH area, facing a heavy traffic area of the show floor. When we found out we were going to be on the perimeter, we were pumped . . . but only momentarily.

(WARNING: Moaning, Bitching, and Excuses)
Directly in front of our podium was the “Bane-of-Our-PAX-Existence Pole.” Maybe only 4 feet out from our monitor set up was one of the support beams for the walkway above. This pole made it very difficult for a passerby to see, stop, and watch Wulverblade being played. This was only made worse when 2 very large signs for the expo hall were placed on either side of the pole. 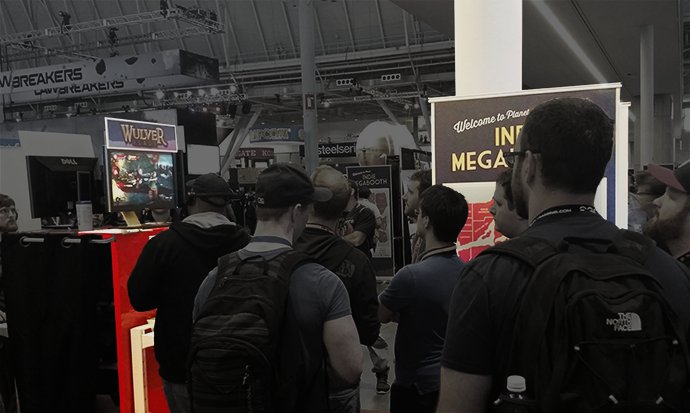 Where players were supposed to stand or watch had suddenly become a very cramped space. I blame all failures of the show and any future failures of the game/company on this pole . . . it also made for a nice leaning post.

Pole problems aside, our set-up went fairly smoothly. The first two computers we were given were stuck in a blue screen loop due to hardware problems, but thankfully the MEGABOOTH group had plenty of backups. We ran into some audio troubles because the computer we were given didn’t have a standard audio out port, but this was easily remedied with a last minute purchase of an adapter and cable extender. We were ready.

Our worries of lack of visibility only grew on the first morning of PAX. At first light of Friday morning, we had prepared ourselves for the onslaught of gamers Mike has always experienced when showing Wulverblade at a conference. This is not what we first encountered. For the first hour or so our kiosk remained empty. Some people rushed by. Some people were distracted by the quick and bright games on nearby monitors. Other people were met in the walkway and asked if they liked puzzle games by a finely dressed man before being led to an iPad ladened podium right next to ours. Yet Wulverblade remained unplayed. As the anti-social caterpillars we are, we were afraid to put ourselves out in the middle of traffic and ask a stranger if they liked old school beat-em’-ups.

I was terrified that PAX would be a bust. That no one would play Wulverblade. That even if they did play, no one would enjoy the game. That all of our excitement leading up to that moment was misplaced . . . but the truth is a little less grim. The people who line up bright and early for a conference are doing so with a specific goal in mind. Early birds aim to be the first in line at a major booth. This way they can be the first person to see something new and avoid the 2-4 hour wait times. The only reason we weren’t seeing traffic is because the crowd was at the large scale booths, in lines, or still being filtered in. Once those lines were full or people had seen the major attraction they wanted to, we had plenty of visitors.

As an incentive to play the game, or incentive to come back for a second run, I wanted to do a poster giveaway. Every classic arcade game has a high score leaderboard and so do we. We decided that the person who was able to set the highest score each day would receive a signed Wulverblade poster in the mail. 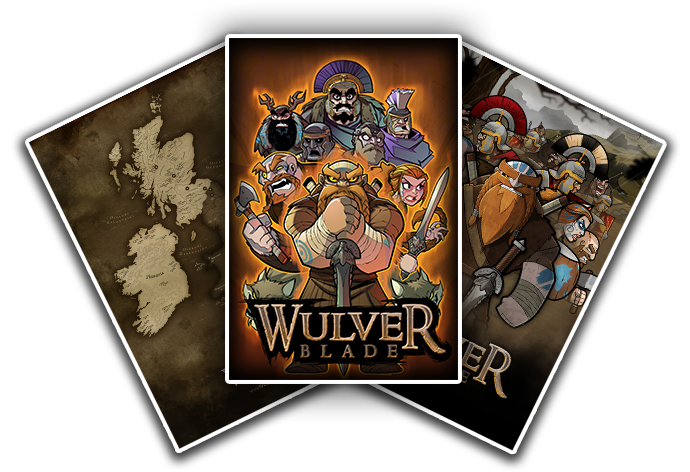 We didn’t have an automated system for this, but if someone set the highest score on the leaderboard, we would take down their name, email, and score. This would limit the number of posters we have to ship to only 3, the highest each day. Additionally, as the day went on it would be increasingly difficult to beat the previous high score so we would have to take down someone’s information less often. At first, people either didn’t notice or didn’t care about the sign for the giveaway, but by the end of the way we had people coming back time and time again to see if they were still in the lead. Some people even came back the next day to see if they won. We ultimately didn’t take down too many names, and plan to send posters to both the people who set the high scores and the people who came back for multiple playthroughs just because they really loved the game. You guys were awesome!

By the end of the first day, we had mastered our elevator pitch: what the game is, what’s the history behind it, what makes it so special, what the game modes are, and (if they were about to play) the controls. Each day it became easier to step out of our comfort zone and approach people if they showed even the slightest interest, if they were just walking by, or if they stopped to look at the signs on that piece of s**t pole.

Although things became significantly easier after the first day, it wasn’t all rainbows and sunshine. We ran into a few non-game-breaking bugs that were easy enough to identify and avoid. There was never a game-breaking-bug when someone was in the middle of playing. We only had to restart someone’s session once when they somehow ended up on the wrong side of a wall.

One aspect we failed to foresee was how good people would be at this game. Before bringing it to PAX, we had decided to reduce the number of lives in the arenas to 2. This was an attempt to both keep cycling fresh players into the experience, as well as not take up too much of their valuable time. There’s a lot to see at PAX and people don’t want to spend too long at one game. We felt 1 life would be unfair to people playing and unfair to the game. We were wrong. Almost everyone played with a partner. If someone was playing alone, one of us would join them until another observer wanted to jump on in our place. Even less experienced gamers could last 10 minutes in an arena. People who were familiar with old school beat em ups and other avid gamers could last close to half an hour. This was definitely a problem for people not willing to wait for an indie game they didn’t know of yet.

The “ideal playtime” for a conference build should average around 3-5 minutes. This lets the player experience the gameplay and art style without becoming bored or distracted by the many things to see on the show floor. A few times people walked away before they had finished because they just kept not dying. To combat this problem we can reduce lives to 1 and expedite how quickly the difficulty in an arena increases.

We found ourselves explaining the same few things over and over which can be exhausting. They are unique elements of the game that would be introduced over time in the campaign. However, on a show floor, it would be ideal if our build of the game was set up to call out a few quirky features that aren’t immediately obvious (even to those familiar with 2D beat ‘em ups.)

Didn’t read that? Here’s the TL;DR

Despite any problems we ran into, any fears we had, any social awkwardness we had to overcome, and any overwhelming pain in our feet, we had an absolute blast at PAX. We got a chance to chat with some awesome developers. We got a chance to put Wulverblade into the hands of gamers and experience, first hand, their reaction to the game. We were able to experience the show floor from a new perspective and were even invited to Xsplit’s Indie Streaming Stage.

It is impossible to know what effect being at PAX will have on the future. We know it was a great opportunity to introduce new gamers to the game and increase visibility, but we will never know how that translates to sales. However, the overwhelmingly positive feedback is validation that all the hours, hard work, and passion we’ve put in is coming together as a game people really enjoy playing.  We were all nervous about the reaction people would have. There is no motivation for people that are playing our game to be particularly kind, especially when surrounded by so many other amazing games. It makes all of the compliments and positive feedback we received all the more valuable, and really got our whole team pumped about the future of the game! If we had to do it all again, we would do it in a heartbeat. 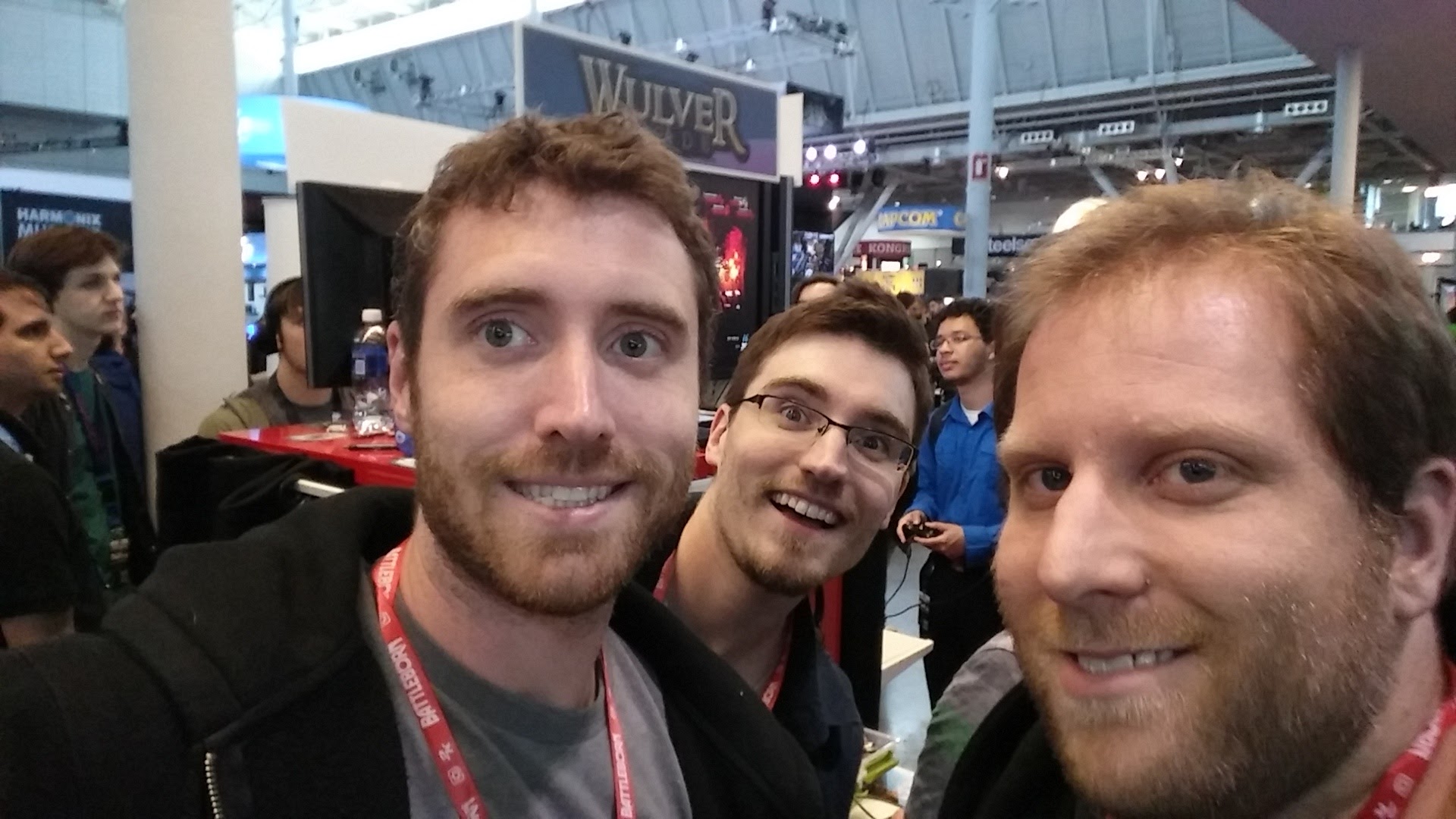 We want to give special thanks to the folks at Indie MEGABOOTH for having us, and to all the great people who came by! We also wanted to give a shout out to some of our new indie friends and their great games:

Deliver Us the Moon by KeokeN Interactive